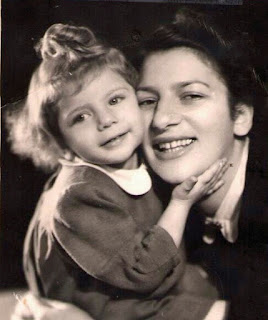 Hana and her mother Priska after the war

IT’S MOTHERING SUNDAY in the UK this weekend - a day that has always been a bit of a mystery to me. Even when I was young, we didn’t mark it in any special way because my Mum, who’d suffered considerable tragedy in her life and lived through the London Blitz, had little time for what she regarded as an entirely commercial enterprise.
Having never become a mother myself, the day that my girlfriends spent being showered with flowers and chocolates by their offspring largely passed me by although I couldn’t of course avoid the full page ads in the newspapers, the battery of cards in the shops, or the irritation of being unable to book our favourite restaurant for Sunday lunch.
Just like my dear old Mum, I never quite got the concept of setting aside one day a year to publicly celebrate the woman who’d given me life. I liked to think that I celebrated her every day, spontaneously buying her gifts all year round, not just when retailers dictated.
Then one day I came across a story that changed my perception of motherhood forever. Three young Jewish women – Priska, Rachel, and Anka - all of whom had married for love and were hopeful of a long and happy life with their beloved husbands, found themselves newly pregnant and standing naked and shaved before Dr Josef Mengele at Auschwitz II Birkenau towards the end of 1944.
“Sind sie schwanger, fesche Frau?” he asked each of them. “Are you pregnant, pretty lady?” In that moment, none of them knew whether to admit their condition might save them or condemn them and their children to an unknown fate. Feeling instinctively that they were in the presence of danger, though, each answered “Nein.”
From that fateful day onwards, their maternal courage would be tested to the limit. Sent to a German slave labour camp to be worked and almost starved to death for the duration of their pregnancies, they manage to conceal their unborn babies from everyone but especially the SS guards that treated them so cruelly. By the time they had come to full term, each mother weighed less than five stone (approximately seventy pounds) and the tiny infants they gave birth to in unspeakable circumstances weighed less than three pounds.
The fact that all three mothers and their babies survived is testament to their defiance and hope. It is also down to luck – they were lucky that their babies were born towards the end of the war when the Germans were preparing to flee. They were fortunate to benefit from the kindness of strangers who risked their own lives to give them sustenance on their interminable journey to the penultimate fully functioning Nazi concentration camp. Mostly, they were lucky that the gas ran out the day before they arrived to be exterminated.
All three mothers would say later that their survival was purely down to luck, but in researching their incredible stories I have come to believe that their stubborn determination to get back to their men after the war and show them the babies two didn’t even know existed, was also a pivotal factor. Tragically, all three husbands were murdered by the Nazis and never got to meet their miracle children. Their young wives all had to somehow find the strength to start anew with little or nothing to exist on, and very few family members left to rely on.
In spite of the worst imaginable start, each of their infants went on to enjoy full, rich and happy lives. They had children of their own and have become devoted parents and grandparents in Britain and the US. Like me, they shall be raising a glass in salute this Mother’s Day to Priska, Rachel, and Anka, the three brave women who epitomize what this annual celebration was originally created for: a day in humble praise of mothers everywhere.

Born Survivors: Three Young Mothers and their Extraordinary Story of Courage, Defiance and Survival is now out in paperback in the UK, priced £8.99. It is currently available in hardback in the US and for pre-order there in paperback in time for Mother’s Day. Available from all good book stores and retailers.
Posted by Wendy Holden at 08:57

I gave Born Survivors to my mum today for Mother's Day. Her father was Polish and after escaping from a camp in 1946, despite searching he never saw his Polish family again. Thanks to the internet and modern technology my mother and I finally found them in 2005! This book will be treasured by her, and one day I hope we meet you at an event and you can sign it!