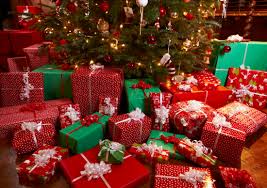 I WENT shopping today. The windows are full of fake snowflakes and fairy lights and the stores are playing festive music on a loop. Everything seems twinkly and shiny and new. With less than two weeks to go, everyone is getting geared up for the annual binge fest that is Christmas in the Western world.
For the first time ever, though, I don’t have a long list of people to buy gifts for or have to wrack my brains about what to get for whom. In fact I don’t have a list at all this year, other than the one that adds up what I’d normally spend so that I can decide which charities to divide it between.
As strange as it feels to wander the shopping malls without a single card or present to buy, nothing is stranger than the responses I’ve had from friends and family when I explained what my husband and I were planning.
“Great idea!” was the usual first response, inevitably followed by a pause and then, “Really? You’re not buying anyone anything?” A few added, sheepishly, “Not even me?”
“No, not even you. And we’re not sending any cards either. This year we’re giving more than half the money we’d spend on you to the charities that are struggling to cope with the flood of Syrian refugees. We’re going to focus on the children who’ll be freezing this winter in miserable, wet camps far from their homes and all they’ve ever known. One frivolous gift for you could buy a family a tent or a groundsheet or some warm clothes. We’re sending the rest of the money to those caring for all the dogs and cats people had no choice but to leave behind.”
Nodding, my friends and relatives would say, “Oh yes, of course. Good for you…,” but their smiles quite often don’t reach their eyes. One (male) friend added, only half-jokingly, “Clever you, more like! I guess that really lets you off the hook.”
Undaunted, I’m going to stick to my plan. Yes, of course it ‘lets me off the hook’ from what can sometimes feel like the burden of the enforced spoiling of those we love at Christmas, but that was never the reason I decided to do it. And, despite what some may think, it does feel uncomfortably Scrooge-like not to give even the children a little something, or to send cards to those friends far away that we see too little of and who will undoubtedly worry that something has happened to us, or that they’ve been dropped.
Then I think about my teenage nephew who first gave me the idea and my resolve returns. In September, when I asked him what he wanted for his 16th birthday, he took three weeks to think about it before texting me back, “I don’t need anything.” Impressed, I nevertheless asked his mother if she had any ideas. “Not really,” she replied. “He has everything he wants.” Exasperated, I pressed her and we finally settled on a £50 bottle of aftershave as she says that although he already has some, he would ‘probably appreciate’ some more.
Pleased that I’d finally found something for him, I fretted that in just a few weeks’ time I’d have to repeat the whole process again for Christmas, knowing that his answer would almost certainly be the same. Uninspired, I’d probably give him a £50 voucher to buy something he wanted. Thinking back to my time as a foreign correspondent in the Middle East, I knew how far that £50 would go in a bleak refugee camp. And having watched videos on Facebook about a paramedic who has stayed on in the ruins of Aleppo to feed the starving animals with whatever scraps he can find, I came up with the idea of sending our Christmas shopping money where it would be far better appreciated instead.
This isn’t the first time we’ve done something like this. In 1990, after I returned from Romania after reporting on the Christmas Day execution of dictator Nicolae Ceausescu, I told my husband what I’d witnessed. Having gone with aid workers to some of the state orphanages and opened them up for the first time, we were faced with some truly shocking scenes. That summer, we forewent a summer holiday so that my husband could drive two consecutive truckloads of food, clothes and medical aid to some of the remotest orphanages in that broken country. Ever since then, we’ve supported one of the charities that I worked alongside out there.
This year, we’re directing our attention to those in even more need. With a usual minimum Christmas spend of £25 for friends and neighbours and much more for family, plus the stamps for the hundred or so cards we usually send, I reckon that the final tally will surprise me and – I hope – go some way to providing a little festive cheer for the recipients.
With 13.5 people in Syria needing humanitarian assistance, and 4.8 million refugees, half of whom are children, we know that our gift will hardly change the world. But – for a few days this December - it will definitely change ours as we exchange fruit instead of gifts and give only hugs and kisses to those we love.
Posted by Wendy Holden at 06:29

You could just send a well-wishing email so that people know they haven't been forgotten. We do that with our seasonal newsletter - to people we value, whether they get a gift or not. And as most of our gifts come from charity shops (for a fiver - not £50!) both the charities and the various nieces and nephews benefit. Good policy to give to those in need though. I love the sentiment.

Thanks Susie, and yes I am sending explanatory emails to those people who don't follow me on social media plus a few cards to the elderly or technophobic, just in case.