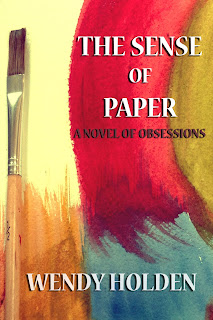 THE SEED of an idea was planted long, long ago. A painter friend told me that he’d remortgaged his Suffolk house in order to buy up the last known supply of the same make of watercolour paper used by JMW Turner.

I was astonished that he set such store by the paper he clearly revered. An amateur dabbler myself, I’d assumed it was purely the talent of the person behind the brush and not the materials that mattered. I was wrong.

A cursory investigation into the illustrious Whatman paper company in Kent and its connection to some of the greatest artists the world has ever known sparked something in my sub-conscious that eventually led me to writing my first novel.

The Sense of Paper started out as a love story - a tale of obsession with paper and with art – set in the wild coastal landscape that I had moved to. I had no clear idea of an ending, or even a middle, when I began it and – although I’d written many other books – this experience was different and exhilarating.

There were times when I didn’t feel to be in control of my fingers as they flew across the keys as if my magic. I watched the words they typed scroll out on the computer screen and marvelled that a hidden part of my brain was purging itself of its secrets and dreams.

I never intended the book to be remotely autobiographical but I didn’t seem to be able to prevent that. My experiences as a journalist on a national newspaper and – for a while – a foreign and war correspondent – spilled out of me in a torrent and before I knew it I had both a middle and an ending that was dramatic, obsessive, and tragic.

The novel-writing process took me two years. During that time I wrote two other (non-fiction) books, which were published with all the attendant publicity. The Sense of Paper felt to be my secret – my own little world into which I could immerse myself day or night and find release.

Although I was an established non-fiction author with hopes of being a novelist too one day, the idea of offering up my finished creation to public scrutiny scared me. I showed it to my husband and a few close friends first. All urged me to get it published. My agent loved it and immediately sent it out into the big wide world.

As a journalist for more than 20 years, I knew all about rejection. Like all reporters, my copy was often thrown back at me to rewrite and I was well accustomed to the feeling. The rejection letters from publishers were a new experience for me, though, and they stung.

My debut novel, they said variously, was ‘remarkable', 'astonishing', 'brave', 'lusciously textured' and poetic.’ They loved the contrasts between Turner’s life, the Suffolk scenery, and descriptions of some of the more brutal war zones of the modern age. After due consideration, though, more than thirty of them passed on publishing it because they couldn’t be certain which pigeonhole to place it in. (I was somewhat comforted to read recently that a book that is currently on the Man Booker longlist was rejected 47 times before it found the right home).

“But is The Sense of Paper a thriller, a mystery, or a romance?” one publisher asked my agent. “How do we market this?” asked another. “Where exactly would we place it on the shelves?” The view was that it didn’t fall into any neat category – something which others might have seen as its unique selling point.

Fortunately for me, an editor at Random House, New York, felt differently about my work. She loved Paper so much, having read it in one sitting, that she rushed into her office at 6am the following morning to catch her boss and demand that they publish it.

They did, in the autumn of 2006, to widespread critical acclaim. The reviews were amazingly gratifying after such a tortuous path and I still receive emails from fans begging me to write another, similar book.

Goldie Hawn, my friend and co-author on another project, hosted a glittering launch party for me at the Mandarin Oriental Hotel overlooking Central Park. The night was all the more poignant for the fact that it was my first major outing since recovering from viral encephalitis which had almost killed me and confined me to bed for a year.

The Sense of Paper is still in print in the US seven years on but is now published as an ebook in the UK for the first time. It is still something of which I am proud. People say that parents will always favour a first child over later children, no matter how hard they try not to, because of all that they went through to produce it. I feel the same way.

Since Paper was published, I have gone on to write many more books – all of them published and all very different. They are mostly the biographies of remarkable women whose lives read like works of fiction. I have also written a novella, Mr Scraps, about a dog caught up in the London Blitz, two screenplays, and have two unfinished novels on file which I hope to have the time to finish one day.

None of them, though, can ever mean as much to me as The Sense of Paper.