IT started with my eleven-year-old nephew Lawrie. He was learning about the London Blitz at school and - like many children his age - was fascinated by the experiences that so many ordinary men, women and children had under such intense and near-constant bombardment.

'But what happened to the animals?' he asked me and, before I could even formulate my reply, the germ of an idea was born. More than a year later and my latest fictional offering, Mr. Scraps, is now available as an ebook around the world.


With an eye-catching cover created for me by the talented French artist Valerie Neguelouart, Mr. Scraps is a heartwarming story of courage, love and devotion that will hopefully appeal to parents and children alike. 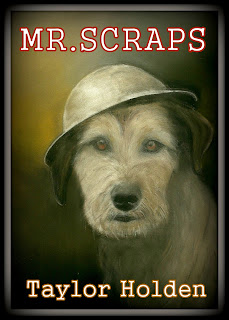 Inspired by the true story of a dog named Rip, it recounts the experiences of Bobby, a seven-year-old rescue dog of dubious heritage, who lives with his Master and uses his sense of smell to navigate the world.

His Boy is missing in action, his Lady has 'slipped down the rabbit-hole' and there’s little excitement in his life. No sooner had his Master told him they were at war, though, than the terror-birds start dropping the egg-bombs that forever change his world.

Through Bobby’s perceptive canine eyes, ears and nose, the reader experiences first-hand the life of a four-legged victim of war. Alone and terrified, he encounters only death and fire-stink until he is befriended by a scab-kneed boy called Lawrie who names him 'Mr. Scraps', and a fireman named Harry who realises how useful he could be.

In a daily game of seek-and-reward Mr. Scraps becomes the first ever search-and-rescue dog. Between them, he and Harry find more than three hundred dead or dying, and are almost killed in the process.

When I had finished writing his story, I sent a personally inscribed printed copy to my nephew and niece who devoured it in virtually one sitting. Lawrie told me, 'Mr Scraps is amazing! I loved the book and I loved the dog. It taught me a lot about war and although there were some sad bits I was happy by the end. I've told all my friends in school about it and they can't wait to read it either.' They passed their copy around and very soon other children, parents and teachers were asking me when it would be available for everyone to read. I was extremely flattered.

Jo, a Year 6 teacher told me it was 'spot on for the curriculum and added. 'This would almost certainly be welcomed nationwide in schools for both history and English. It is an excellent way of teaching pupils about what it was like in the war using the clever device of a dog as narrator. This ticks all the boxes and the kids I gave it to to read all loved it.’

Lucy, a mother of two said she could 'hardly put it down' and added, 'As a dog lover it has all the best details of animal behaviour. It also reflects those terrible bombing raids during the war and the story as a whole is the more poignant for being based on the true story. I was gripped. It’s definitely got legs!'

Liz, another mother said that when her husband came in from work and found her reading the story to her children, he asked her to go on with another chapter, he was so gripped.

Clare, a social worker, described it as 'both educational and entertaining. It caught the children's imagination from the first page. I can see it being the kind of book parents would like too. It could also work as a great example to kids to think about those less fortunate than themselves which is so important in my work.'

Alan, a publisher and father of two told me, ‘I much enjoyed the simple sincerity of the story that would appeal to adults as well as children. It is a very touching story and a work of empathy and imagination that has in it the potential for a wonderful film adaptation like War Horse.’

But it was what the children had to say that really moved me. Most of them seemed to read it in one sitting and some started all over again once they had finished. Tiffany, 8, said, 'I really enjoyed the book and the story is good and exciting because you want to know what happens next. And it is a different story and it is just amazing that the dog could rescue people like that. I shall tell a lot of friends about it and that it is a good book to by (sic)'.

Ben, 12, said, ‘I don’t normally like these kinds of books but I really liked this one. I felt so sorry for all the dogs and cats abandoned by their owners. It made me think a lot about what happened then and when I spotted a dog in the street I thought looked a bit like Mr Scraps I told my mum.’

George, 14, said, 'We'd already done the war at school but I had no idea that dogs were involved in the Blitz and I hadn't thought what their lives would be like. I didn't cry but I did get a lump in my throat.'

And so, after some thirty or so books published, many of them international bestsellers including my last one - the 'memoir' of  Uggie the dog from the movie The Artist - I was encouraged to embark on an exciting new venture and break into ebook publishing via Amazon, Kobo, and virtually every ebook and epub format that's on offer globally.

Mr. Scraps does indeed now have legs, and I am hoping that all four of them will carry him swiftly into Kindles and homes, phones, schools, iPads, Nooks, and human hearts in just the same way that he has crept into and curled up forever in mine.

There are too many forums to list where Mr. Scraps is for sale now at the incredibly competitive price of £2.99 in the UK (equivalent elsewhere), but here is the link for Amazon/Kindle UK - http://www.amazon.co.uk/dp/B00C5EWK4S

Please visit the website or store of your choice, find my scrappy little rescue dog and take him home?

You won't regret it.