Mindfulness, The Congo, and a Shaggy Dog Story


Spring is almost upon us and with it comes a blossoming of new books and some exciting fresh material to keep me busier than ever. First, there is the publication of the British version of a book that reached number 3 in the New York Times bestseller's list at the end of last year. Secondly, I have just completed the manuscript of a page-turning memoir of a young woman's extraordinary experiences in Africa, which we hope will be snapped up internationally. And finally (paws crossed) I hope that I am on the brink of selling my childrens/young adult book about a dog in the Blitz entitled Mr Scraps, a much-loved and deeply personal project that started as a gift to my nephew.

First things first ---the indefatigable Ms Goldie Hawn. This week marks the UK launch of my latest book with Goldie, entitled 10 Mindful Minutes: Giving Our Children - and ourselves - the social and emotional skills to reduce stress and anxiety for healthier, happier lives. It's a rather convoluted subtitle, admittedly, but the message couldn't be simpler - reach for your own oxygen mask before applying one to your children. 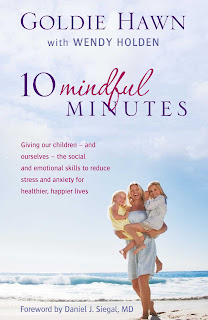 As Goldie says, children are taught everything about their skeletons and the way their bodies work but they are rarely taught about the workings of their own brains and especially how they respond chemically to the potentially deadly stress hormones that we all produce at times of anxiety. Through her charitable educational foundation called MindUp she has gathered together some of the greatest minds in the field of neuroscience and emotional psychology. She has then drawn on their expertise to devise ways of helping parents and children deal with everyday stresses including anger, grief, fear and wild swings of emotion.

By simple breathing techniques and through taking a few moments to appreciate all that life has to offer in terms of smells, sounds, tastes and visual feasts, Goldie puts the reader back in the driving seat and leads them through what could otherwise be a minefield of confusing information. Her pioneering work has had such amazing results within schools across the USA and Canada that the parents of those children who have benefitted from the programme begged her to write a book that would explain it all to them just as simply. 10 Mindful Minutes is the result and its reception has been overwhelmingly positive. Goldie and I are both enormously proud of what we have managed to achieve and are indebted to those who make it their life's work to improve life for future generations.

The publicity schedule for the book kicks off this week with Goldie appearing on The Graham Norton Show tonight, BBC Radio Woman's Hour on Tuesday, Desert Island Discs and the Steve Wright Show in the coming week, This Morning on Friday, an interactive chat on Mumsnet on Monday, along with numerous newspaper, radio and TV articles and a book signing at Waterstone's in Piccadilly on Wednesday. I shall be happily tagging along for much of it.

Once Goldie has flown back to the US, I can get on with my latest projects and help promote the ones I have already written. Among them is what I can only refer to right now as my Congo book, but which we are hoping great things for. It tells a remarkable and moving story of a young British woman on a voluntary posting as part of her gap year who was inadvertently caught up in something that changed her life forever.

I am also waiting for news on the sale of Mr Scraps, the story of a homeless, orphaned dog caught up in an equally bewildering situation - the London Blitz. This book began life as the germ of an idea to write a new story for my adored nephew Lawrie who, I am delighted to report, reads as avidly as I did when I was his age. Once he had given it the thumbs up, I decided to cast it wider and the feedback I got from children, parents and teachers was so positive that I polished it up and put it out to tender. My agent and I are currently in that delicate stage of negotiation that precludes me from saying more for fear of jinxing it. So, paws crossed!

As for the rest of the year and into 2013, Goldie and I have a third book planned and I am currently in the enviable position of having three other non-fiction projects on offer with my name tentatively attached to them. They are all very different, and could see me spending a great deal of time in London, California and the American South for a while, so I hope to be able to work on two of them if the conditions are right. I also have a great new idea for a novel which I am absolutely itching to write---just as soon as I find the time. I have got as far as a first chapter and an outline, and am hoping to devote some time in Italy this summer to pulling together a proper proposal.

The more astute among you may have noticed that my website has recently been updated and revamped to keep it current and--I hope--more interesting. This is a working version. There are a few tweaks yet to be made by the talented Ian and Roger at Spark New Media but so far I am very happy with how it all looks and would love your feedback.

As you may have realized, I am not the most prolific blogger and this will probably do me for 2012 unless I get a sudden urge to vent, so I wish you all a very good year and hope to see you here again soon. Thank you, W x
Posted by Wendy Holden at 07:57